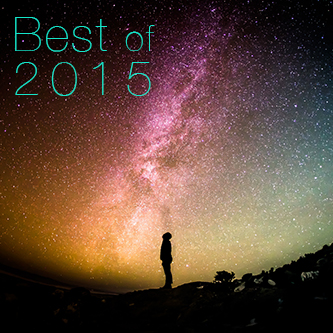 A lot happened on the web in 2015. There was the dress, Brother Orange, and countless other viral sensations that most of us have already forgotten about. Amidst all of that noise, we also discovered some great sites and apps that have the potential to make a much longer lasting impact.

Each week of 2015, All My Faves featured eleven of the web’s best products — nine websites, one game and one new mobile app. Our only criteria in selecting the Weekly Faves was that each product chosen had to have the potential of impacting someone for the better. Our requirements for the Best of 2015 list are no different.

The All My Faves team created this list by voting for our favorite products that were featured as Weekly Faves at any point in 2015. Our selections were organized into the following categories: Productivity, Education, Entertainment, Sports, Health, Finance, Self-Improvement, Coffee Break, Design / Art, Wow, and Game. These may be the best sites of last year, but they’ll all be just useful as we move forward into 2016.

Squarespace gets all the attention, but Bubble has quietly become one of the most powerful tools for building websites and mobile applications. The site makes it easier for anyone – regardless of programming experience or technical knowledge — to build their own product. This has the potential to revolutionize the Internet, removing the barrier between coming up with an idea for a site and actually building it. Fully functional sites and apps can be created using Bubble’s visual tools and drag-and-drop features. If you want proof of what Bubble can do, look no further than the platform’s site itself (it, too, was built using Bubble). There is a slight learning curve involved with mastering Bubble, but there are plenty of helpful tutorials to get you on the right track. If your resolution for 2016 was to finally launch that product you’ve been dreaming of, Bubble could be the tool that makes you reach your goal. Bubble has the potential to make the web a better and more productive place. 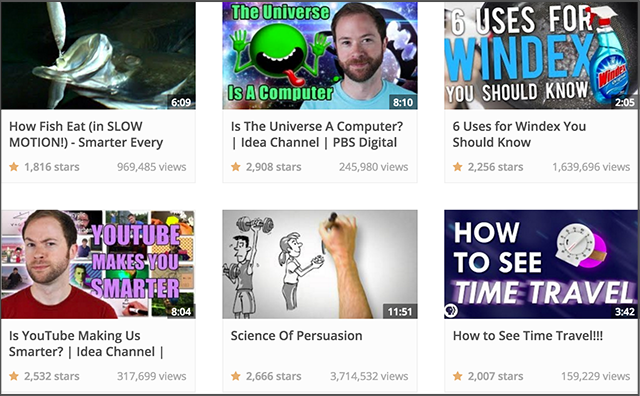 We featured many impressive education sites in 2015, but Brainpump easily made its way to the top of that list. The site offers one of the most effective methods of learning whatever you want, whenever you want. In comparison to sites like Lynda or Codeacademy, Brainpump isn’t necessarily useful for learning a complicated new skill. But the site does let you learn a lot about all types of interesting topics. It offers a continuous stream of educational YouTube videos on widely varying topics. It also lets you watch videos related to your specific educational interests. Make Brainpump your go-to online learning channel for 2016.

If you ever felt frustrated with the lack of exciting content on Netflix or your preferred streaming service in 2015, you weren’t paying enough attention to Findie. The site features some of the best videos from the world’s most talented undiscovered filmmakers. The site scours the web for entertaining videos and short films, making them all available to view on their platform. The best part about Findie is that all of the videos it features are able to be described by one word: cinematic. That means all of the videos are high quality, and most of them are worth watching. 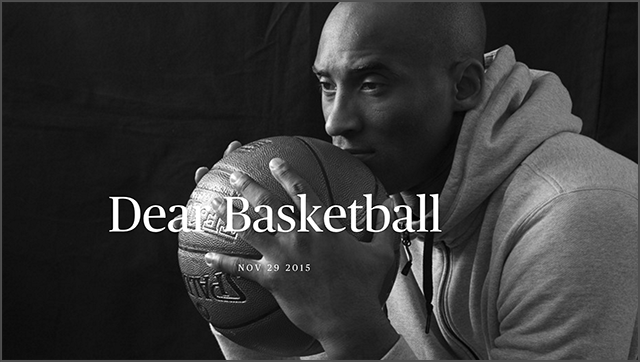 In 2015, we learned Kobe Bryant would be retiring after finishing his final season with the Los Angeles Lakers. These sorts of major announcements are typically delivered through media outlets — such as LeBron’s infamous “I’m Coming Home” Sports Illustrated article. Kobe’s announcement, too, was told in his own words. But it came in the form of a poem, entitled “Dear Basketball” and published on The Players Tribune. This was a significant moment for sports media. When LeBron announced he was returning to Cleveland, The Players Tribune did not exist. In just over a year since its launch, the digital publication has transformed the way athletes communicate with sports fans around the globe. Founded by former New York Yankee Derek Jeter, the site features articles written by professional athletes from all different sports. It gives a new voice to sports media — one that comes directly from the source.

Labdoor helps consumers make more educated decisions before purchasing supplements like protein, vitamins or fish oil. It’s the best health site of the year because it takes an innovative approach to providing transparency in the health supplement market. Labdoor secretly buys products from various companies directly off the shelves before testing them in an FDA-registered lab. They then provide reviews of the supplements based on their data analysis. It’s like a Consumer Reports for supplements, providing you with in-depth analysis of products as well as recommendations based on your needs. It’s incredibly useful if you’re thinking about adding a new supplement to your diet, and it has the potential to transform the way users regard reviews of medical products in the future.

Robinhood is the perfect app for anyone interested in learning about the financial markets. The app certainly introduced me to the art of stock trading in 2015, simply because it’s so easy (and relatively cheap) to use. There are no brokerage fees involved when you buy stock through Robinhood — the app takes zero commission. Investing in a company is as simple as a few clicks. It’s a great learning tool for those that want to invest small amounts of money while following the market on a regular basis. Much like Bubble.is is lowering the barrier of entry to web development, Robinhood is making it possible for those with no financial education to get involved in stock trading. 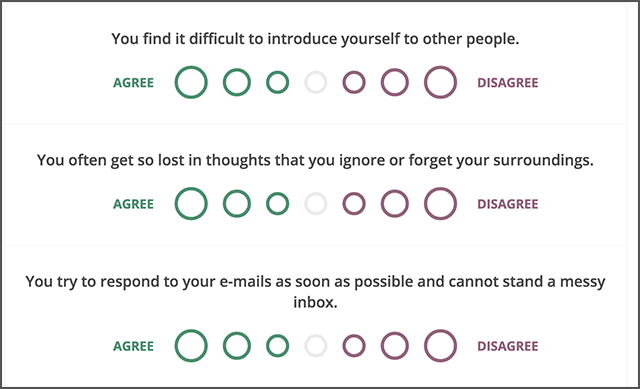 16 Personalities is a free online personality test. While many such sites exist, few are as cleanly designed as this one. None offer as in-depth and accurate of results. After answering several questions about your thoughts, habits and daily life, the site groups you into one of the 16 personality types. It describes your personality, then offers career and life advice. If you spent your 2015 unsure about your job, your life, or your future outlook, you should take this test as soon as possible. It’s free, and it’ll reveal much about your personality than you might never have noticed before.

In October 2015, Reddit launched a news offshoot called Upvoted. The site takes Reddit posts and repurposes them into original news content. Whereas Reddit provides links to third-party sites, Upvoted is designed more like a self-contained digital publication. The articles, however, are all based on something that was originally posted to Reddit. Upvoted removes the comment section Reddit users may be searching for, but it links back to Reddit to allow readers to join the discussion. Upvoted is well-deserving of the status of 2015’s best Coffee Break site. 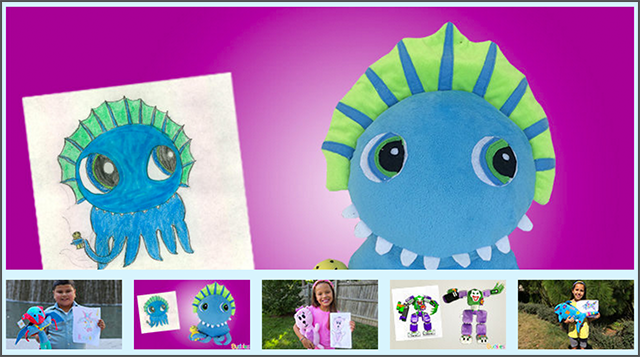 Budsies is one of the most uniquely innovative companies that we featured in 2015. The site transforms art into fully customized stuffed animals. Parents can snap a photo of their child’s drawing, then upload, email or text it to Budsies. From there, an artist sews a plush animal based on the image. The Budsie is then delivered back to the family that designed it. It’s a genius concept, allowing any child to see their imagination turned into an actual product.

Brooklyn-based musician J.Viewz released an impressive interactive album in early 2015. It’s called the DNA Project, and it’s a continuously evolving work that lets fans break each song down into its smallest components. You can click on specific parts of every song on the album in order to find more information about the album-making process. J.Viewz also created this project in real time based on listener feedback throughout much of 2015. Fans could comment on every section of every element of the song, resulting in an intricately complex and carefully constructed piece of music. A lot of great albums were released in 2015, but this was the only one that made me say Wow. 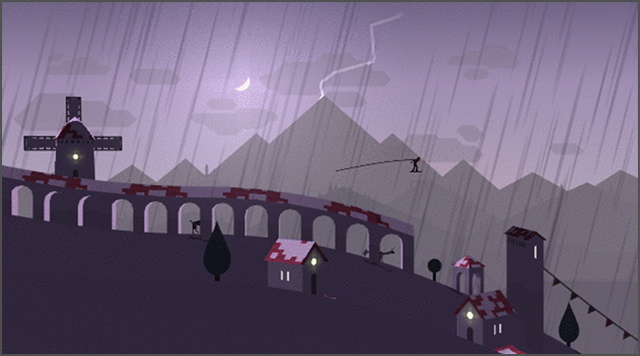 A major portion of my 2015 downtime was spent playing Alto’s Adventure. This was by far the sleekest mobile game to be released in the year. It’s an endless runner game in the style of Tiny Wings, but it’s much more impressively designed. The animation and background design only makes the app more incredible to look at as you keep snowboarding down the mountain in hopes of a better score.