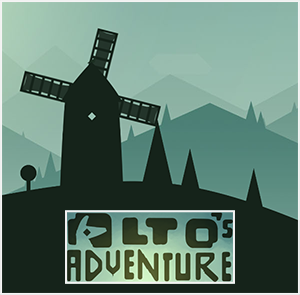 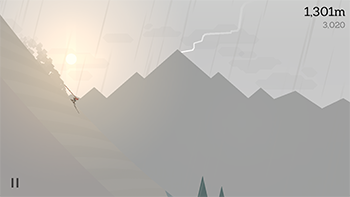 Alto’s Adventure is an endless runner iPhone game built by Snowman and designed by Harry Nesbitt. The Alto’s Adventure team has created a game with simple, familiar mechanics, but it’s unparalleled in terms of playability and quality of design. Flappy Bird, Crossy Road, Tiny Wings and Temple Run all have essentially the same mechanics, but all of those apps were created in a bright and cartoonish style. Alto’s Adventure’s design and animation, on the other hand, is as smooth as the snow which your character slides down. As you play the game, the background shifts from day to night, and the weather changes from rain to lightening to snow to sunshine. There’s impeccable attention to detail, and it’s easy to get lost in the backdrop as you glide your character down mountain slopes and through woods and villages. 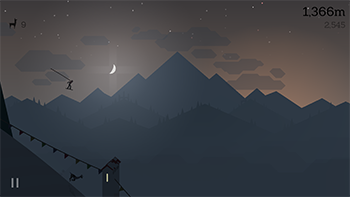 The goal in Alto’s Adventure is to snowboard as far as you can on each run, doing tricks to gain boosts along the way. Your run ends if you hit an obstacle or fail to complete a jump. There are also special items you can pick up — like coin magnets or hover feathers — and you get extra points depending on how many llamas you collect along the way. In terms of mechanics, there are really only two things to remember: you can jump by tapping the screen, and you can do backflips by holding your finger down. Similar to Tiny Wings, Alto’s Adventure includes a list of three challenges to be completed each level. The challenges encourage you to reach certain distances, land certain tricks, and reach other accomplishments. It’s a way for users to feel a sense of forward progress in the app, despite the fact that it’s basically designed to keep you playing over and over again. If you shell out the $2 to download the app, that’s likely to happen. It’s an addicting game, but you can tell that a lot of time and dedication went into it. The app has a steeper price than most people want to pay for games like this, but it’s definitely worth the cost. 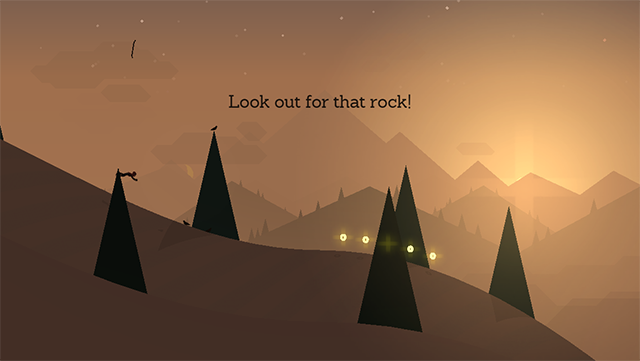