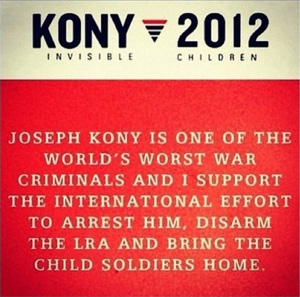 How a viral video exposed the ultimate war criminal…

With over 75 million hits and counting in just one week, this is possibly the biggest viral campaign in history: A brilliantly made short documentary by film maker Jason Russel, attempting to expose one of the world’s most feared murderers, Joseph Kony.

In the film (entitled ‘Kony 2012‘) Russel documents how on his travels through Africa, he befriended a Ugandan boy called Jacob who unfortunately was one of thousands of children to suffer rape, abduction and torture under the brutal rule of Kony and his so-called ‘Lords Resistance Army’. We hear that the situation had become so bad that people would rather die than face life under a monstrous regime that appeared to go completely unnoticed in the Western World. And we are told that the only way to stop him is to show the world his crimes; to make him aware that his arrest is inevitable; and to strive for the ideal that where you live should not determine whether you live…

Ignored by America for 26 years…

The sad truth behind Kony 2012 is that up until the film’s release a week ago, 99% of the globe was totally unaware of this killing machine. Approx 30,000 children over a 26 year reign of terror, have been recruited as boy soldiers forced to mutilate and murder their families, and girls turned into sex slaves. And there’s been not a mention or affirmative action by the West to stop it. Initially the campaign was refused by the American Government due to financial costs.

Our Government chose to ignore this state of affairs until the campaign’s driving force led to the most meager of actions it required: 100 advisers deployed to advance troops and give some modicum of belief to the people of Uganda. Over time, Joseph Kony has fought for nothing but absolute power. He has repeatedly used peace talks as a means of rearmament, time and time again.

How you can help stop a murderer

The US intervention is minor. And it will certainly not last forever. If people are not seen to care about this sad state of affairs, action will no longer prevail. So it is completely up to you to aid the campaign; to spread the word and give Joseph Kony the international infamy he deserves; to bring a halt to his devastating, pointlessly murderous dictatorship. Click here to see the documentary.

Share this post and let the world see this needs to stop. With your help, it can!