Inside Out: A Global Art Project With A Transformative Mission

Inside Out is a global art project with a mission to “transform messages of personal identity into works of art.”

Participate in a Global Art Movement

The Inside Out project was created by street artist JR, who initially gained notoriety by posting huge portraits of suburban “thug’s” faces throughout Paris. JR was ultimately awarded a TED Prize for his plans to create a participatory art project called Inside Out. 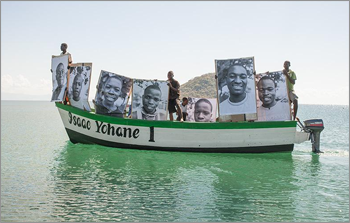 The site is where examples of this project are hosted. The common theme of Inside Out is similar to the works originally created by JR — large-format street “pastings” of portraits. Thus far, nearly 200,000 people from more than 112 countries and territories have posted works, all of which have been collected and archived on the site. Each installation has a specific social purpose, such as ending gender-based violence or spreading climate change awareness. The works are also usually prominently displayed in public areas in order to emphasize their messages.

Browse Interesting Installations from Throughout the World

Inside Out’s website allows you to explore the many projects that have taken place throughout the globe. In the “Explore” section of the site, you can browse projects by location — and there’s at least one example on every continent aside from Antarctica.

There’s also a “Best Of” section of the site, which the Inside Out editorial staff has declared the most interesting projects debuted around the world. That section includes pertinent topics like “LGBT Rights in Berlin Russian Embassy” and “Be the Change, Juarez.” The iniative also brings photobooths to various locations, allowing passerby to take pictures that will then ultimately be prominently displayed somewhere throughout the community. It’s easy to get involved with Inside Out if you’re interested, but browsing some of the installations that have already taken place throughout the world is also cool to see.