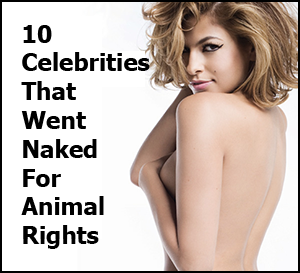 Whether celebrities willingly pose sans garments or suffer from iCloud hackings, at the end of the day nudity leads to more fame (or should we say infamy)? Whatever it is, nudity is key in PR.

Is It For The Animals Or For Their Own PR? 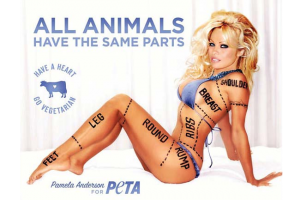 PETA, People for Ethical Treatment of Animals, is an organization that is not afraid of using provocative images and nudity for a better cause. There’s no denying that celebrities probably gain much more in such PR stunts than the animals they try to benefit, and disrobing for a real cause makes both the exhibitionists and their fans feel unembarrassed about the whole thing. Whatever it is, we love seeing these beautiful photos, and if they help the animals, all the better.

The Top 10 Photos That We Love The Most: 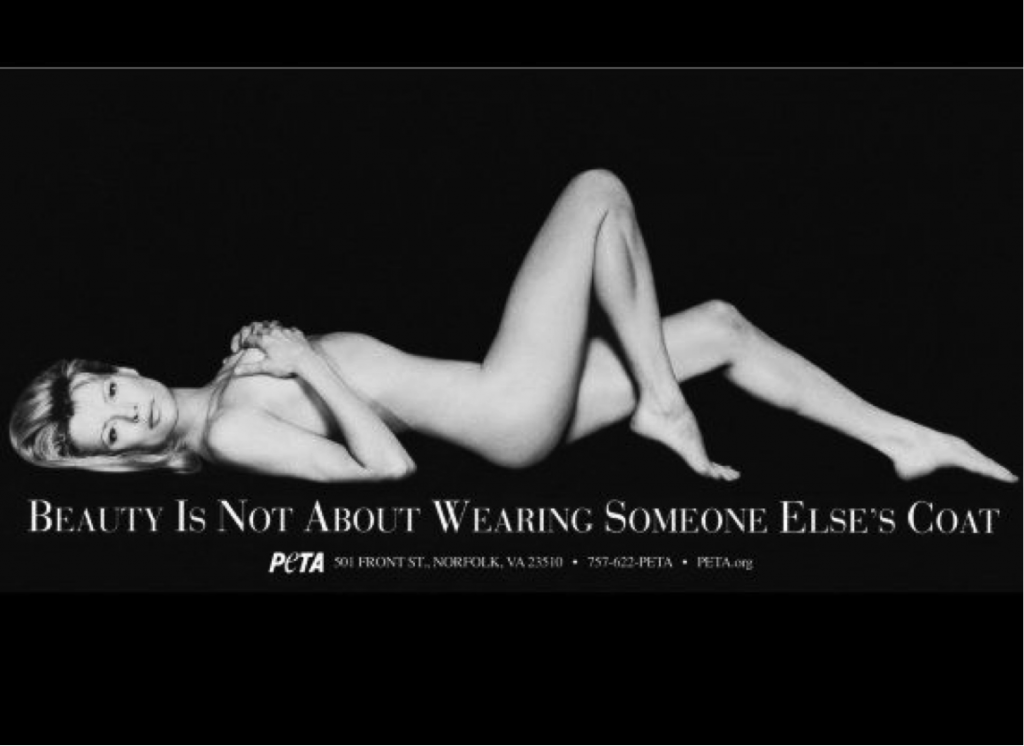 Kim Basinger, an American actress and a former model. She is currently 61 years old. While looking at this photo of her, however, that is barely believable. 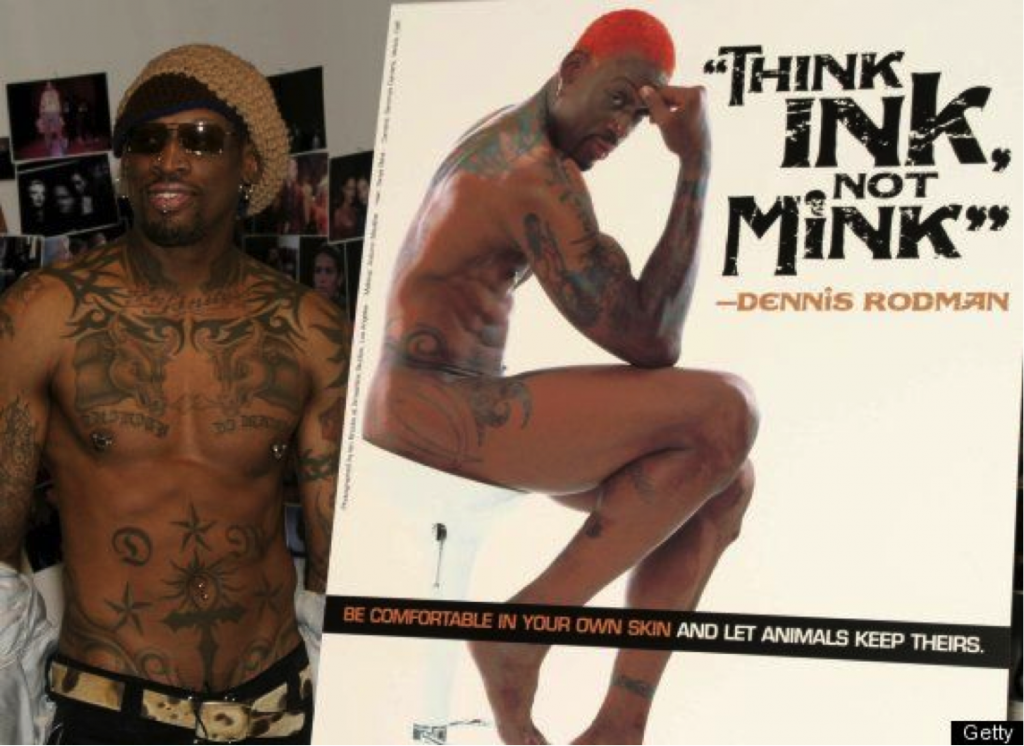 Dennis Rodman, a former NBA basketball player, went to NYC for Fashion Week. Most would think that he went to sit in the front row at a show, but instead he went to unveil his provocative PETA ad in the very tents where designers push their fur garments. He felt as though this was the perfect way to make a statement. 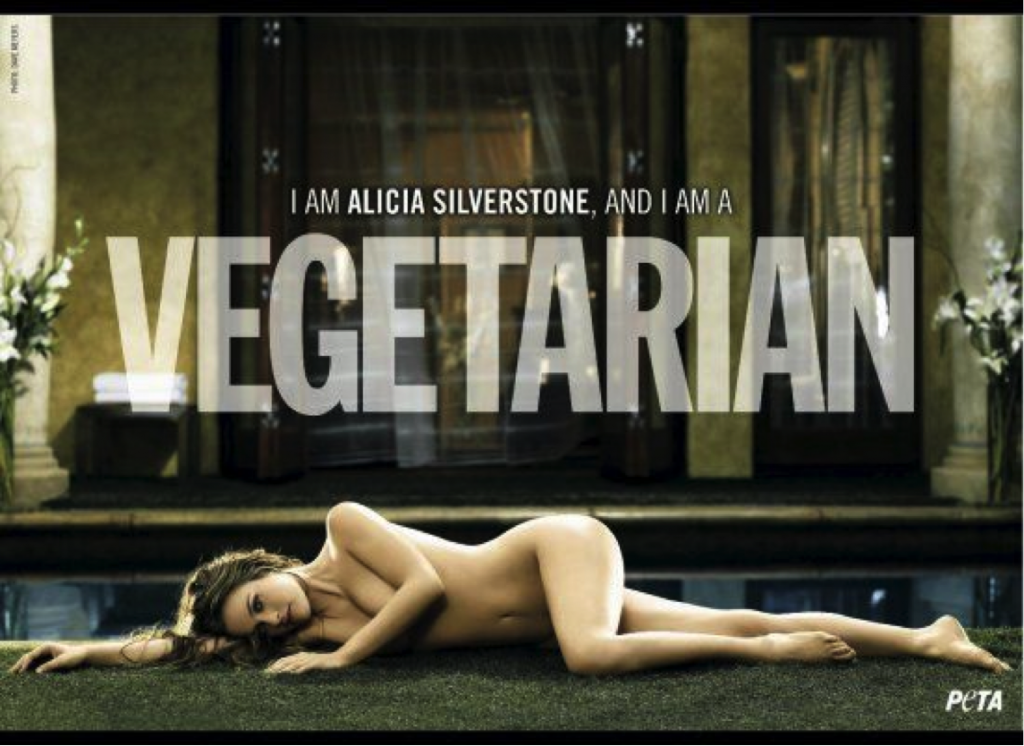 Alicia Silverstone, an American actress, author, outspoken vegan and animal rights activist, had no problem shedding her clothes for the PETA campaign. 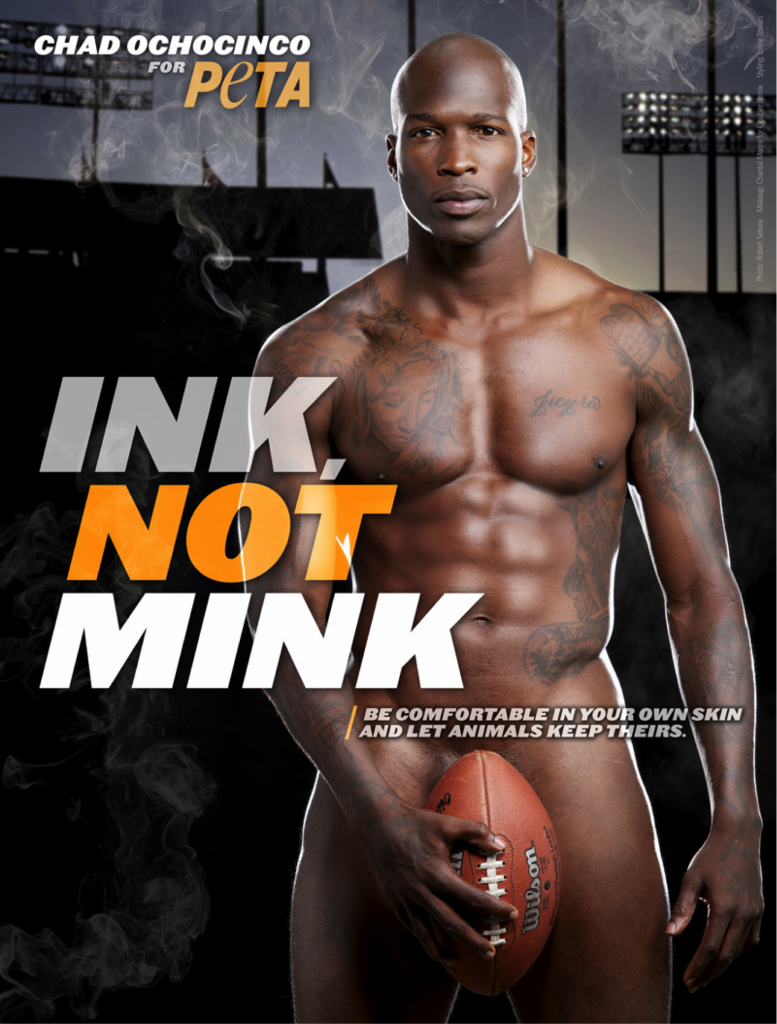 This is our personal favourite photo of pro football player Chad Ochocinco. After seeing this photo, we might just have to start watching the game! 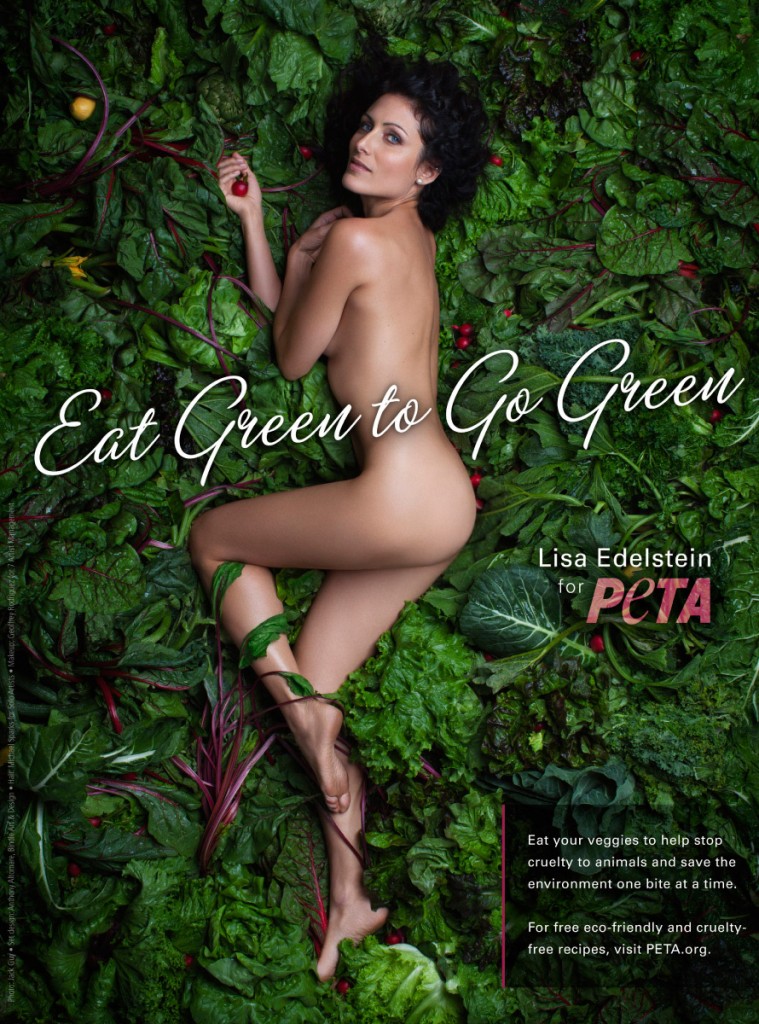 Lisa Edelstein, an American actress and playwright known for playing a hot Dean of Medicine on the TV drama House. Surprisingly, she is 48 years old and still sexy. Being vegetarian has treated her body really well! 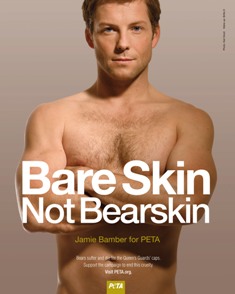 Jamie Bamber, a British actor known for his role in the sci-fi TV show Battlestar Gallactica. Through this photo he is protesting the cruel killing of bears to make the Queen’s guards’ ceremonial caps. 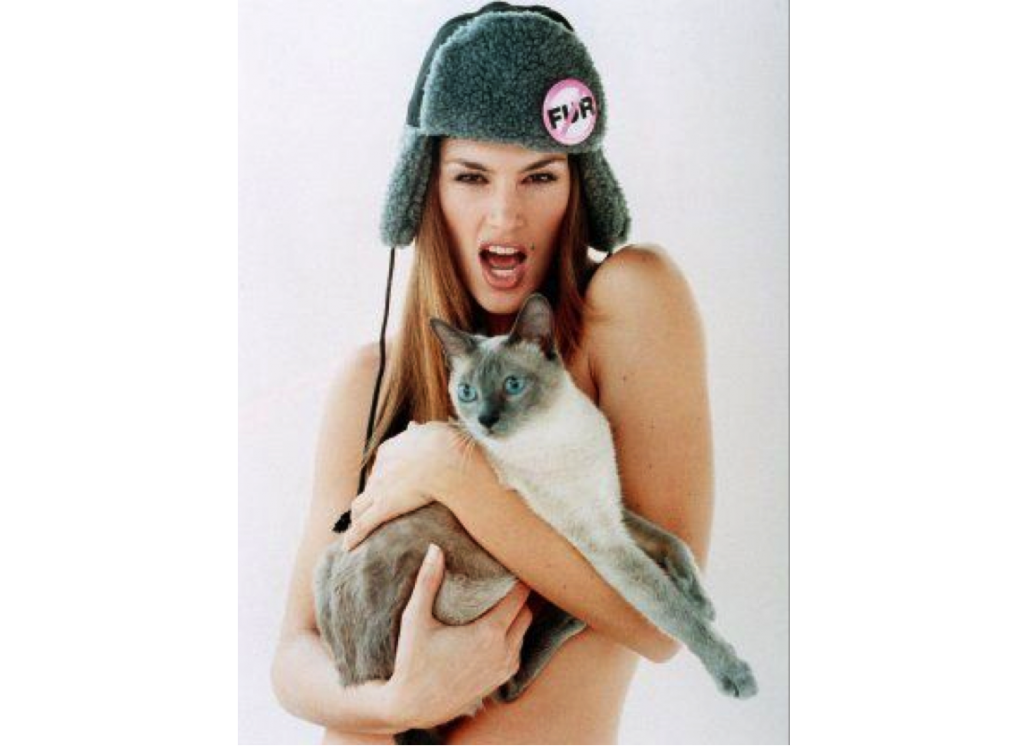 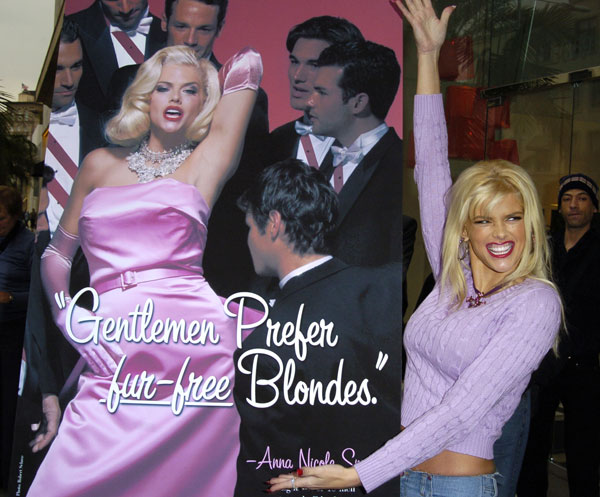 The late Anna Nicole Smith, a model, actress, and television personality, was fur-free.

9) Naomi Campbell and Other Models, Courtesy of Daily Mail UK 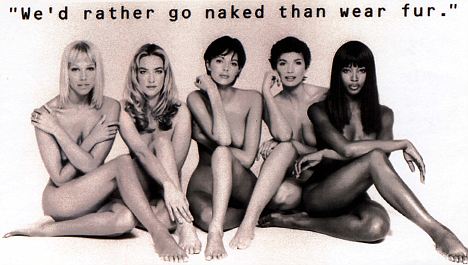 Supermodel Naomi Campbell, who was a part of this iconic 1994 campaign, has recently caused fury over her decision to wear fur once again. 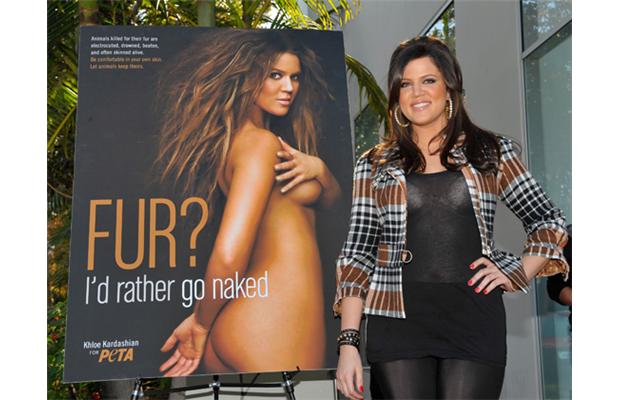 And finally: Khloe Kardashian, who has since then broke her partnership with PETA, had a gorgeous poster made for the “Fur? I’d rather go naked” campaign. Unfortunately, this seemed like a good idea at the time. However, according to some sources, she was accused of being a hypocrite for simultaneously selling fur items at Dash, the signature store she owns with her sister, Kim.

Yael is a techie, a vegan food and travel writer, an active member of the health and fitness community. She founded a natural food supplements company, Pure Standard. She blogs on a variety of subjects from health to technology.