Posted on Wednesday, November 12th, 2014 by Will Hagle 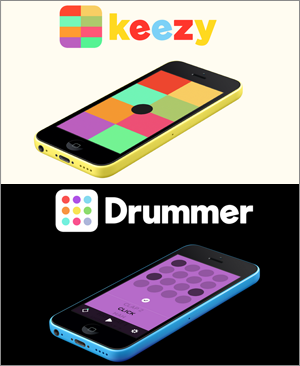 Keezy is a toy for musicians that’s powerful enough to be used as a new form of musical instrument.

Keezy is available as a free download in the App Store for iOS mobile devices. The app markets itself as being “simple enough for toddlers, but useful for professional musicians.”

That description couldn’t be more accurate. The app’s design consists solely of eight brightly colored tiles. If you click on one, a sample is triggered and sound plays back. You can hit the tiles in the rhythm of your choosing in order to create a new track, although the samples are all pre-loaded and correspond with developer-created songs. The coolest feature is the ability to use your device’s microphone to record your own samples to a new board, although it could be cool if there was also an option to load sounds from a keyboard or computer.

Use Keezy’s Sample Pad or its Programmable Drum Machine

Keezy has also created a second app called Keezy Drummer. The official description of this app claims that you can be “making beats in seconds,” and again, that’s exactly what you can accomplish upon downloading. Like the original Keezy app, the drum machine is easy to use but has powerful capabilities. It’s a uniquely designed programmable drum machine, with customizable tempo and a list of sounds that can be used in your beats. The app is somewhat limited by those sounds, and unlike Keezy you can’t record your own samples, but it’s still fun to be able to create a unique beat as easily as the app allows.