Posted on Monday, November 3rd, 2014 by Will Hagle 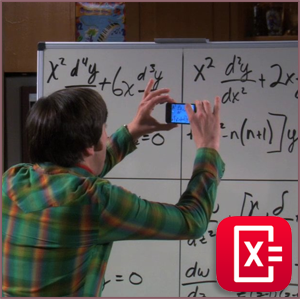 Photomath is a calculator app that uses your smartphone’s camera to solve math problems in real time.

Use Your Camera to Solve Math Problems

Photomath may be the most useful application for

worldwide math students of all levels. It uses your smartphone’s camera function to read typed math problems (expected to be from a textbook), solving those problems in real time. If you hover over a piece of text that reads “2 + 2,” for instance, Photomath will instantly inform you that the answer is 4. The app also has the capability to solve much more complex problems. It’s almost unbelievable how easily it can solve detailed algebraic equations, for instance. The app is currently available in Apple’s store as well as the Windows store, with an Android app expected in early 2015.

An App that Knows Arithmetic, and is Learning More

As of now, Photomath can solve arithmetic expressions, meaning it knows how to add, subtract, multiply and divide. It can also work with fractions and decimals, powers and roots, and simple linear equations. The team claims to constantly be working on new features for the app, so it’ll be exciting to watch as the functionality grows with future updates. Photomath is useful in a variety of contexts, but it’s especially useful in the classroom setting. If students are stuck on a particular problem or don’t know exactly how to figure it out, the app can help them along in an instant. There is, of course, an educational element of the app that shows users how the problems were solved instead of just solving them for them. It’s an awesome app that I really wish was around when I was forced to take math classes in school.