We The Economy: 20 Short Films You Can’t Afford To Miss

Posted on Monday, November 3rd, 2014 by Will Hagle

We The Economy was created via a partnership between Paul G. Allen’s Vulcan Productions and Morgan Spurlock’s Cinelan. 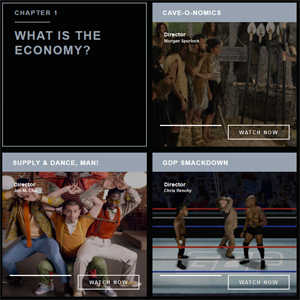 The site hosts 20 short films, each exploring a different aspect of the economy in an inventive manner. A different filmmaker has also created each of the films. The partnership in production companies is a strong one, as Allen was the co-founder of Microsoft (meaning he knows a thing or two about money), and Morgan Spurlock is a master at non-fiction filmmaking. It’s an important time to both be aware of economic issues and to understand how they impact your personal life as well as society as a whole, so the project is a noble one.

Each film on We The Economy is under 10 minutes long, ensuring you can learn a lot about a particular topic without spending too much time watching a lengthy film. The topics are still discussed in an in-depth manner, as leading economic researchers, analysts and academics are interviewed in many of the films. The best part about the films is that they’re all free to watch on the website, and most of them are entertaining as well as informative. The film directed by Spurlock, called “Cave-O-Nomics,” is especially enjoyable. The mix of animation and live action also keeps things interesting. These are some of the most important films you could watch this year — or, as the site correctly explains — you “can’t afford to miss” them.