delivers cars for rental, by the day.

Renting a car is a huge pain. If you’re landing at the airport, you usually have to take a shuttle to some distant center and wait in a long line. If you’re not near an airport, you’re usually out of luck. Zipcar was a good idea, but it’s similarly difficult to get a Zipcar unless you live close to them. Skurt changes all of that. The company delivers cars directly to you through an Uber-like interface, letting you know exactly when your ride will arrive. You can drive the car as much as you want within the city, and Skurt will come pick it up from you when you’re done. 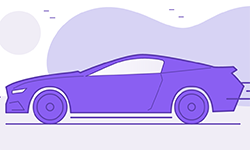 Skurt is currently operating in three cities — Los Angeles, San Diego, and Miami. They also claim to be expanding fast. It’s difficult to see how they won’t be able to position themselves as one of the dominant startups in the transportation industry. I can easily imagine a world in which no one owns a car, but they call Skurt for deliveries when they need one and take ride-sharing services for the rest of the time. While that era is still a long way off and may never actually happen (even though many have adopted that model), Skurt offers an interesting alternative, and long needed update, to the traditional process of renting cars.