PSTMRK: Find A Penpal Anywhere In The World

PSTMRK reinvents the concept of the penpal by connecting people around the world through the power of technology.

PSTMRK is an app that builds upon the concept of penpals — an activity that took place primarily in the pre-digital age — but adjusts it for the modern age. The app, which was created by the same developers responsible for the endlessly entertaining photo app Frontback, allows users to send postcards to other users in areas around the world. After creating a profile, all users need to do is select a region where they’d like to communicate with another user. The app allows users to send pictures as well as an accompanying digital letter to the individual with whom they are matched (using the Frontback picture technology). There are, of course, security features allowing users on either side of the conversation to end a string of communication whenever they feel uncomfortable (or to continue it as long as they’d like!). 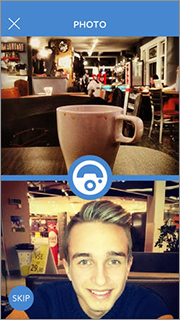 Connect With Someone New from Anywhere In the World

Similar to apps like Rando — which also connects users around the world, albeit in a more anonymous manner — PSTMRK only allows users to send postcards after they receive one.

This makes for a continued, back-and-forth dialogue, rather than an instance in which one user is doing the majority of the writing. The ability to connect with individuals around the globe is obviously one of the best aspects about the internet in general, and it’s great to see developers taking advantage of this international connectivity in inventive ways. The app also allows users to build a profile by connecting with Facebook, making the experience easier for everyone involved.