How Do You Draw Addiction? Meet the iPhone’s Latest Craze 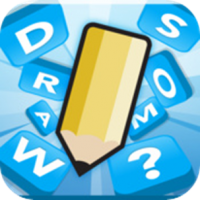 There’s an app creating an awful lot of noise in the App Store right now. It’s called Draw Something, and it’s been downloaded over 350 MILLION times since it’s release A MONTH AGO! But what is it and how on earth has it overtaken absolutely everything since its release?

Well, it’s basically a game of iPhone Pictionary that you play with your Facebook friends who’ve already downloaded the game. You get a choice of 3 things to draw (easy, medium or hard difficulty), and your friend has to guess what it is. If they get it right, you both get 1, 2 or 3 coins (depending on the difficulty), which you can use towards getting new colors for your palette and other apparently fun add-ons. And then you switch, and you have to guess what you’re friend has drawn.

How do you draw addiction?

Draw Something’s success is down to three things: (1) It’s so easy to just pick up ‘n’ play (2) Once you do, you just can’t stop! and (3) It’s a whole new means of social interaction: you’re communicating through the pictures you draw in the game, and creating new topics of conversation for when you next see your friends in person! Because it’s gone viral, you’ll probably have a lot of Facebook friends already on the app to play with (I couldn’t believe just how many of mine were on it – hundreds!). And if you don’t, I’m sure your friends could easily be persuaded by a free download 😉 Check out some of the amazing pics drawn by users on Draw Something below, or click here to check out the iPhone’s latest craze.