The Nostalgia Machine: Get Your Childhood Jam On

Posted on Tuesday, November 4th, 2014 by Will Hagle

The Nostalgia Machine is a virtual jukebox showcasing the most popular songs from each year, dating back to 1960.

Relive Popular Songs from Your Childhood

The Nostalgia Machine is a site built by freelance designers J. Doran and E. Slevin. It’s a simple premise but it can lead to hours of entertainment since it’s executed so well. The basic concept is that you enter a year on The Nostalgia Machine’s homepage, and you’re transported to a virtual jukebox of all the most popular songs from that timeframe. It truly is a nostalgic experience, especially seeing songs like Coolio’s “Gangsta’s Paradise” or Blues Traveler’s “Run Around” on the page for 1995. Most of the songs are embedded straight from YouTube, so it’s easy to listen to a song or to jump around from track to track.

Explore the Sounds of Different Decades and Years

In addition to YouTube streaming, it’s also possible to play through the songs of a particular year as a playlist on disco.io. The developers have hosted playlists for all the years offered on The Nostalgia Machine, which starts in 2013 and dates back to 1960. The homepage suggests that users select a childhood year “for optimum nostalgia,” but the site is also useful for finding a dedicated space to listen to the most popular songs of an era with which you might be less familiar. The songs were all chosen from the Billboard year-End Hot 100 singles, though, so it’s likely that you’ve heard the majority of them. Still, the site itself is a fun trip through decades of musical history. 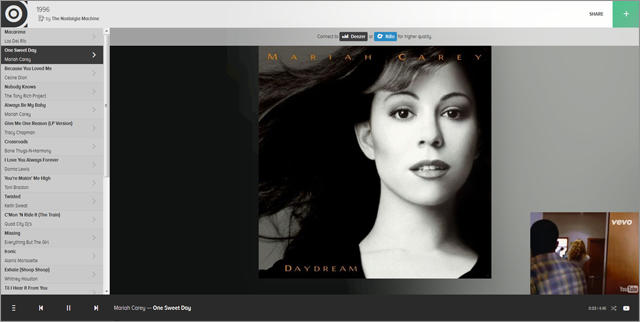