Music from Soundcloud and Shuffler.fm

Harmogram‘s primary function is its online radio feature — as it pulls tracks from Soundcloud and syncs genre channels from Shuffler.fm’s list of stations. Although the amount of songs and genres hosted on the site is extensive, the main draw is the sketch of lines that moves, twists, and contorts along to the beat. Le Bas himself cheekily describes the visual element of the site as “an artist version of a Fast Fourier transform combined with what one could call a harmograph,” but it’s essentially the iTunes visualizer with a heightened focus on design and aesthetics. 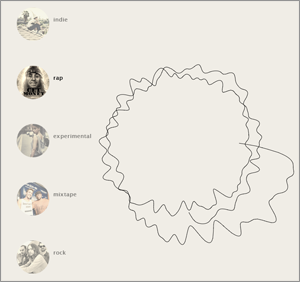 Harmogram offers the ability to customize the accompanying graphic, choosing where you want it to be placed in the browser as well as the exact angle, amount of layers, and radius of the moving image. There’s also the possibility to tweak various aspects of the color scheme. Although the site is definitely limited in terms of the actual musical content that it offers — as it’s impossible to search from songs and tracks are limited to just a few examples — it’s still interesting to watch the design work its HTML5 magic along with the tracks. I can’t imagine using the site on a regular basis, but it’s a cool experiment, and definitely a site Le Bas should be proud to show in his portfolio.