Bounden is an app created by Dutch studio Game Oven that teaches you ballet while playing a game with a partner.

Learn Ballet Dances with a Partner as You Play

Bounden is simultaneously one of the goofiest and most entertaining apps I’ve ever seen. It’s available on mobile devices for both iOS and Android, and it costs $1.99. If you like apps that get you off the couch and moving around with a friend or, in this case, dance partner, then it’s a $2 well spent. At its core, Bounden is a game. The objective is to twist your phone to guide a spherical object along a path of rings. In order to do so, two “players” grasp either end of the phone, working together as the game progresses. 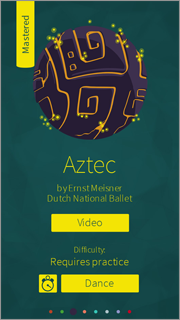 As you play Bounden, the idea is that your bodies will move and contort in a way that mimics ballet dancing. In fact, the choreography was designed by the Dutch National Ballet, and music plays along as you dance. In terms of the actual dances involved, you can choose from the Aztec, Coral, Crater, or Peak. It’s unlikely to teach anyone serious ballet skills, but it is extremely fun and hilarious to use. At the very least, it’s a mobile app that gets people moving around, playing and laughing together. That’s more than most apps can say. It’s definitely worth a download.