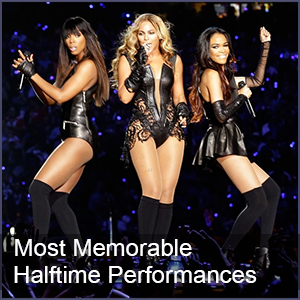 Who said halftime is just for commercials?

Janet, Janet, Janet… This day goes down in history as the day the phrase “wardrobe malfunction” entered America’s vocabulary. There is still debate whether JT “accidentally” exposed a certain body party in Houston that day. The FCC fines were given out, thrown out and appealed in judicial court. In the court of popular opinions, this case is still being debated over 10 years later. Even though bedazzling made a comeback that day, Janet and JT had a pretty kick ass performance going on. Too bad the last few seconds are the only thing being remembered.

Tom Petty & The Heartbreakers played an excellent set, and Tom Petty is the kind of star who understood the occasion and what his job was. Starting with the right option “American Girl”, he quickly captured the audience and performed a great show. Even though the Pats lost, and some started calling the quarterback Tom Brady & The Heartbreakers, Tom Petty nailed the performance with a list of his greatest hits. Sorry New England, maybe this year…

Wanting to keep viewers on show as well as the game, the NFL brought out one of the biggest names and half time shows. The King of Pop got the crow going with a medley of “Jam,” “Billie Jean” and “Black or White.” MJ performed a bit of “We Are The World” with the crowd turning over cards revealing drawings by children in Los Angeles. He ended his performance with “Heal the World,” while surrounded by over 3,000 youngsters and a blow up globe.

Paul McCartney was the safe choice following the previous year’s “Nipplegate.” McCartney transitioned from pop acts to older performances. His stage was made of video projectors, and his performance of “Live and Let Die” was filled with fireworks. Saving the best for last, he finished with “Hey Jude” during which those in the stadium all joined in for.

Naturally the band started off their performance with their best known hit, “Start Me Up”. The band performed on a stage that was built to look like the Stones’ iconic lips logo. Though the performance was a good one, the Stones’ were performing in the post-wardrobe-malfunction halftime world and the NFL opted for a five second tape delay allowing for censors to mute parts of “Start Me Up” and “Rough Justice”.

Madonna entered the field on a golden throne delivered by Roman Soldiers ready to rock the longtime favorite “Vogue”. She was then joined by LMFAO, Nicki Minaj, M.I.A, and Cee Lo Green. She performed a “Party Rock Anthem”/”Sexy and I Know It” infused take on “Music”. The performance was then joined by M.I.A and Minaj to perform “Gimme You Luvin”. The biggest part was seeing M.I.A.’s middle finger and Cee Lo Green and a robed choir for a performance of “Like A Prayer”.

The Boss started his performance by telling viewers to “put the chicken fingers down” before starting his 12 minute rock. Bruce had previously turned down several prior invitations to perform at the Super Bowl. Good things come to those who wait and it was no different in this case, The E-Street Band rocked a four-song set of crowd favorites.

Steven Tyler’s musical career had been facing some trouble due to band and personal issue, but he and Aerosmith were still the ones the Super Bowl Wanted. They performed their hits while switching off with N’ Sync performing some of their hits. It was a random pairing of bands, but it worked none the less. The real treat was when Britney Spears, Mary J. Blige and Nelly showed up for a show-stopping performance of “Walk This Way.”

The performance started off with Queen B’s silhouette on fire, and then she emerged through the smoke. The performance included all of her top hits, and the rumors of a Destiny’s Child reunion came true fulfilling many people’s dreams. Beyonce was backed up by a dozen female dancers and members. There is no question why Beyonce is the queen, and this amazing performance helped solidify that.

U2 is a band everyone knows, and they’re one of the greats. It’s also no surprise that they created and performed one of the greatest live TV performances of all time. This Super Bowl came just a few months after 9/11, and U2 made this performance a tribute to the victims. The backdrop featured the names of the victims and at the end, Bono opened his jacket to show an American Flag sewn in. The country was still in pain, and U2 brought the country together for a few moments.

If you’re a Bears fan this rap will forever hold a place in your heart (as it does mine), seeing this was the last time they won a Super Bowl. But it’s also still memorable in the NFL world. The “Super Bowl Shuffle” is a rap performed by the players of the 1985 Chicago Bears. It was released 3 months before their win in Super Bowl XX. Surprisingly the song peaked to number 41 on the Billboard Hot 100 list in 1986.

Who could forget the power outage that pressed pause on the big game for about 30 mins. Social media went into a frenzy and the referees, coaches and players didn’t know what to do with themselves. Rumors quickly spread that Beyonce broke the dome with her turbo charged performance (which is basically the best reason ever), or that the sideline reporters were behind it in hopes for more air time. The official reason was due to an “abnormality” in the system. Talk to any 49ers fan, and they will still claim this is one of the reasons they lost to Baltimore that day.