Swarm: Meet Up With Your Friends

Swarm is an app designed to make it easier to meet up with friends.

Find your Friends, and Find out What They’re Doing

Swarm is a new app created by Foursquare Labs that makes it easier to track your friends’ locations, let them know where you are, and what you’re up to. If you want to meet up with friends but don’t have specific plans or a specific group of people in mind, you can use swarm to generally ask if anyone is going out or doing anything fun. You can also suggest an activity — such as going to a particular restaurant, bar, concert, museum, etc. If any of your friends on Swarm want to join you, they simply need to hit “I’m interested.” It can be difficult organizing a group of people to do something as everyone’s schedules become busier and busier, and Swarm removes the difficulty of organization. It just takes one person to suggest something, and the plans can easily happen.

Another GPS-Based Social App from Foursquare.

Another aspect of Swarm is the ability to see which of your friends are located nearby. At this stage in its development, the app only displays your friends’ locations in relative distance to you (500 feet away, 1 mile, 10 miles away, etc.). It’s a little creepy, but since you have to approve every friend that can access your profile and location information on Swarm, it’s actually a cool feature to be able to find out if any of your friends are in the immediate area. 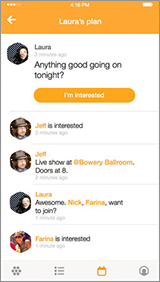 The strangest feature of Swarm is the “check-in” feature, which essentially does the exact same thing as Four Square. It makes sense that the company would integrate some Four Square technology into the new app, but it’s unclear whether they expect users to replace Four Square with Swarm or to check-in across both apps. Also, Swarm’s check-in feature is less rewarding because it takes away the gamification that can be found in Four Square. Still, Swarm shows promise for the future — It’s a great idea and it’s executed well, and it will only get cooler once more people sign up and begin using it.